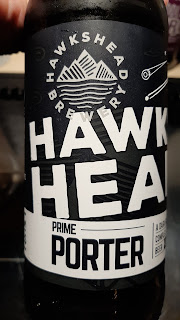 The brewery:  "Hawkshead Brewery began in 2002, in a barn just outside the village of Hawkshead in the Lake District...... In 2006 we relocated to the Mill Yard, beside the River Kent at Staveley, brewing on a new 20 barrel Brewhouse and built a brewery tap - The Beer Hall. In 2018 we commissioned a new state of the art Krones Brewkit and began work on our new Brewery in Flookburgh which was fully functional later that year in September."

Another tasty ale from the Hawkshead stable, I didn't find it too hoppy at all, a nice mix of flavours. Full bodied but not too heavy at 4.9% A.B.V.