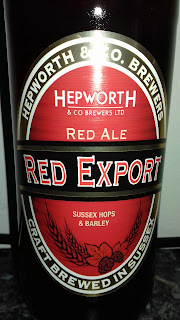 The Brewery: “Andy Hepworth started brewing in Reading almost directly after University. He moved to Horsham in 1980 and within five years became the youngest Head Brewer in the country, winning many awards. The long-standing tradition of brewing in Horsham came to an abrupt halt in 2000 with the sale of its last brewery and so Andy, determined to maintain that tradition, joined up with the key members of the brewing team in order to create Hepworths, an independent brewery aiming to build its own range of quality brands, while maintaining flexibility for contract work….. The Company was established in 2000 and started production in 2001.”

The Beer: “Slightly sweeter than most of our ales, Red Export has a delicate hop character reminiscent of Irish Red Ales”

I got quite into red ales when we went to Ireland in the caravan a few years ago and still enjoy one occasionally. This was a gift from a colleague who in turn had been given some for his birthday - however he is a coeliac and couldn’t partake. I certainly didn’t find it too sweet and nice that it was local too. 4.5% A.B.V. May 2019.