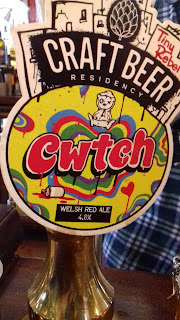 The Brewery: “We are Tiny Rebel, an award-winning brewery from Newport, South Wales…………………..From two guys in a garage to a bespoke brewery with thousands of fans, we’ve grown a lot since 2012. Since then, every year has been bigger and better………………….We are the youngest and only Welsh brewery to win Champion beer of Britain. We are the only brewery to have won gold, silver and bronze in the Champion Beer of Wales competition (in our first year!) and the only brewery to defend a gold the following year.”

The Beer: “Probably the best word ever. Cwtch (rhymes with butch) can mean either cuddle or cubbyhole. Grab a glass, relax and cwtch up with this untraditional Welsh red ale - a perfect blend of six caramelly malts and three citrussy American hops. It isn’t your average bitter - the hops do more to this deep amber coloured beer than just provide bite. Any old hop can do that! We’ve selected some of the most aromatic and tangy hops from the other side of the pond to give this red a fresh hit that complements the caramel flavours of the malts that gives this beer its colour. Drinkability and balance makes this beer.

I have had this before but it must have been in pre-blog times. A nice drop although a little hoppier than I’d expect from a ‘red’. Very more’ish though. 4.6% A.B.V