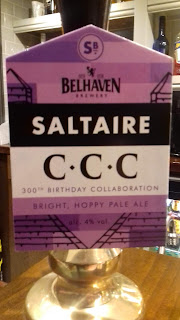 The Brewery – Belhaven: “Belhaven – or “Beautiful harbour” – nestles among the rolling barley fields of the beautiful East Lothian coast, around 20 miles east of Edinburgh. For nearly 300 years, we have brewed in this place using only the finest local barley and choicest hops. Established in 1719, Belhaven is Scotland’s oldest working brewery. With abundant local barley, fine water from the brewery well and access to markets up and down the coast, Belhaven was the perfect place for a brewery back then, and it still is today.”

The Brewery – Saltaire: “It began in 2003 over a laboratory bench when Tony Gartland, owner and founder, met Derek Todd, an industrial chemist at a Brewlab course in Newcastle….Tony and Derek were ambitious and obsessed with quality and flavour. They set up with a 20bbl bespoke Moeschle brew kit in 2005 and the following year started producing as many as three beers a week…..Saltaire Blonde and Cascade Pale followed in 2007, and quickly became popular with pubs and drinkers.”

Nothing on the website of either brewery for what was no doubt a one-off but, as you may have deduced from the description this wasn’t one of my faves. I could see it’s appeal on a hot summers’ day though. 4.0% A.B.V.