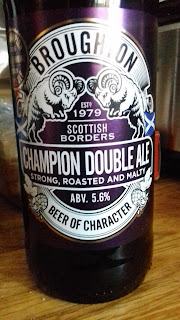 The Brewery: “Broughton Brewery was founded in 1979 by David Younger and James Collins in a former sheep station in the wee village of Broughton in the Scottish Borders. It was the first initiated Scottish microbrewery, which appealed to customers looking for a new “craft beer” experience outside the traditional mass-produced lager and exports. Scots, wanted something more, something dynamic, different, and with real flavour, hop character, and taste.”

The Beer: “A wonderful blend of the finest Scotch Ale and a dark roasted stout creates this Double Ale with double the flavour and double the character.”

Another from my Easter stay with friends near Falkirk and what a drop this was. Strong, dark and very yummy. Bottle conditioned though so careful pouring required. 5.6% A.B.V. April 2019.