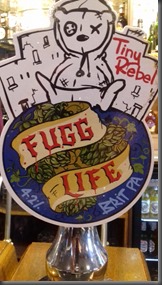 The Brewery: “We are Tiny Rebel, an award-winning brewery from Newport, South Wales.We are the youngest and only Welsh brewery to win Champion beer of Britain. We are the only brewery to have won gold, silver and bronze in the Champion Beer of Wales competition (in our first year!) and the only brewery to defend a gold the following year.”

The Beer: “British hops like Fuggles may not be trendy like their American cousins, but they live the Fugg Life. Our Brit PA is wholly hopped using British hops. Rather than the fruity, citrussy flavours imparted by American and Pacific hops, their British cousins give an earthy, woody flavour that makes for perfect bittering. An easy drinking 4.2% pale ale, Fugg Life delivers a rich bitterness before a clean, dry finish.”

Tasted better than it looked - had I seen how pale it was I might have chosen something else but it was very enjoyable if still a little ‘zingy’. 4.2% A.B.V.

The Head of Steam, Tynemouth. March 2016