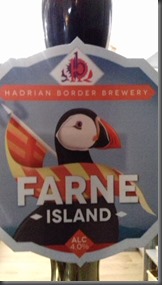 The Brewery: “….in 1994 we took over the Border Brewery Company in Berwick upon Tweed. This was an 8 barrel brew plant with 15 barrels of fermenting capacity, selling 2 barrels per week at that time. Very soon we had to add more fermenters, by 1999 we had the capacity to brew 35 barrels per week and were rapidly reaching that limit of sales. At that time Farne Island was the best selling beer and it was being brewed twice a week to keep up with demand. The search was on for a bigger plant. In 2000 the Four Rivers brewery in Byker Newcastle went into liquidation, there was a 20 barrel plant available. We had looked for premises around Berwickshire but had drawn a blank, we had nowhere to put this large brewery if we bought it so we decided to buy the whole business from the liquidators and relocate ourselves and the existing business to Tyneside. The Four Rivers had originally been called the Hadrian Brewery so we changed the company name to Hadrian and Border, the Border, now north of Berwick and Hadrian’s wall were one and the same thing, just in different locations and eras.”

My awkward palate disagreed and found this just a little too hoppy. A decent pint though. 4.0% A.B.V