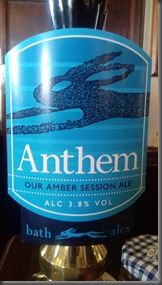 The Brewery: “Bath Ales brewed its first beer in 1995 at a tiny brewery in Wincanton, Somerset. Since then the brewery has moved twice, but the beer we make and the Hare that proudly adorns our beers remains the same – with a bit of a refresh along the way. Founded by Roger Jones and Richard Dempster, the pair brought on Rab Clark, a local publican, because he was willing to sell their first beer. Demand for Bath Gem quickly spread though, and as business grew the brewery bought its own pub, the Hare on the Hill, and moved production to Bristol.”

The Beer: “this sessionable amber ale is full of citrus and peach aromas that balance perfectly with a grapefruit bitterness. This easy-drinking ale is perfect paired with salty pub snacks such as crisps, peanuts and pork ...….”

That was all I could grab at the time as the link to the full page didn’t work. I’m a fan of Bath Ales thanks to their delicious Gem, but this didn’t excite sadly. Nothing wrong with it, it just wasn’t to my taste. 3.8% A.B.V