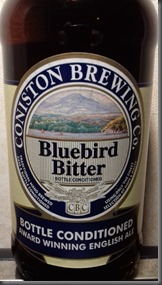 The Brewery: “The Coniston Brewing Company, with its roots in the hotel and licensed trade knows a thing or two about giving their discerning customers quality and service. Ian Bradley, son of the owners of the Black Bull in Coniston, has studied and graduated in the art of brewing, and in 1995 the Coniston Brewing Co. was built: you might say, since then, Ian’s brews have gone from strength to strength! Six beers in regular production yield an output of 1600 gallons a week for distribution to 100 customer outlets. Acclaim is not limited to the U.K. alone, bottled varieties of Bluebird and Old Man are shipped to the U.S.A., Sweden and Hong Kong.”

The Beer: “It is, quite simply, a wonderful beer. It is exceedingly pale (21-22 units colour), with just a hint of colour in its cheeks from the dash of crystal malt. It has a massive orange fruit aroma from the challengers, balanced by biscuity malt.”

I first tried this back in 2012 - at the Black Bull - when we stayed at the caravan site in Coniston. I remember enjoying it then so was so glad of the chance for another taste. Paler than I would normally like but a nice easy going session beer. 3.6% A.B.V. April 2018.