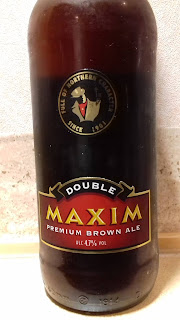 The Brewery: “Maxim Brewery began full production in Houghton le Spring in 2007. To brew the best beers possible requires the best brewery equipment available. Our 20 barrel brewery equipment was previously at the Canongate Brewery on the Royal Mile in Edinburgh’s historic Old Town. This was Scottish & Newcastle’s pilot brew house and as you would expect, was built to a very high specification. Indeed, it remains probably the best equipment of its size anywhere in the UK today….”

The Beer: “Now the only original Brown Ale still brewed in the North East of England.It delivers a mouth of full and rounded flavour that is well balanced and smooth and leaves a pleasant and lingering slightly sweet aftertaste. Roger Protz describes it as ‘An undoubted classic. It is a fine example of a North East brown ale. It is a good balance of ripe grain and spicy hops, with a long bittersweet finish’

Another from the Asda at Monks Cross near York – they really do have a great selection of regional ales – many at 4 for six quid. Yeah, I like this but did find it a tad on the sweet side. Not off-putting though. 4.7% A.B.V. March 2019.