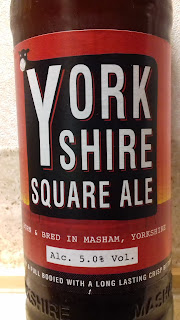 The Brewery: “In 1992, Paul Theakston took a daring leap into the unknown. As a fifth generation brewer of his family company, he chose to leave T&R Theakstons following its sale to a national brewery. Instead, he chose to champion independent brewing in Yorkshire and built his own brewery from reclaimed equipment in the very same town, Masham…..Paul is the Black Sheep”

The Beer: “Yorkshire Square Ale was first brewed in 1999 to celebrate our unique ‘Yorkshire Square’ fermentation process.Yorkshire Square is a golden ale with rich, dry warming full flavour with hints of grapefruit and Demerara sugar. It ends on a long dry finish and is firm favourite with our Flock!”

Another great reginal offering from the Asda at Monks Cross near York that I mentioned in a previous post. I’m a fan of many of Black Sheep’s beers and enjoyed this one too. Thankfully the hints of grapefruit were just that – kept in check by the maltiness. A good strong ale without too many frills. 5.0% A.B.V. March 2019