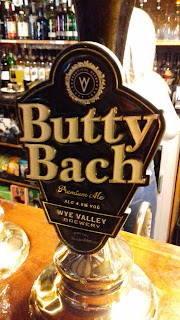 The Brewery: “It all began in the summer of 1985! After brewing for years for Guinness, Wye Valley Brewery founder, Peter Amor decided to branch out on his own. He began brewing from the back of a pub in Canon Pyon in Herefordshire but soon moved to the old stable block of The Barrels in Hereford - Wye Valley Brewery’s very first pup….”

The Beer: “Butty Bach is a Welsh term meaning ‘little friend’ – and this charmingly smooth premium ale has certainly made more than a few friendships in its time. We brew it using Maris Otter and Crystal malts together with locally grown Fuggles, Goldings and Bramling Cross hops. With such fine ingredients, no wonder it remains a firm favourite.”

And here we go again. Another trip away in the caravan and quite a few ‘research’ expeditions means a number of new entries to the Archive over the coming weeks.

Nice drop this, yes a little sweet but it provided a perfect introduction to a very enjoyable Sunday afternoon on my first weekend away. Cracking pub too. 4.5% A.B.V.