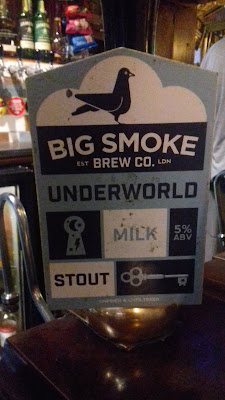 The brewery: “We are a young brewery producing modern beer styles in the leafy suburbs of Esher in Surrey. We brew hop forward pales, rich stouts and everything in between….Our beers are always available at our pubs and good bottle shops, pubs and bars throughout the UK.”

Yum. Yummity Yum. I like a stout every so often and after the rather subtle but inoffensive Solaris this really hit the spot. Extremely flavoursome which is not surprising as it weighs in at 5.0% A.B.V.