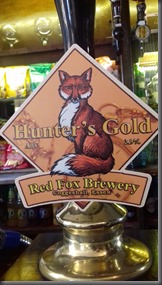 The Brewery: “Red Fox Brewery was created in July 2008, in a refurbished chicken shed at Upp Hall Farm. Brewing began in August, and it has been producing award winning beers ever since…..Founder of Red Fox Brewery, Russ Barnes was the brewer of Supreme Champion Beer of Great Britain at the Great British Beer Festival two years running as head brewer at his previous brewery. After almost 4 years with them, Russ left to start his own brewery. The first beer brewed was Wily Ol’ Fox, swiftly followed by the CAMRA gold medal winning Coggeshall Gold.”

The Beer: “A Core beer and firm favourite at the brewery since the beginning, this CamRA gold medal winner is a good all-rounder with a hint of tangerine on the aroma from the fabulous Styrian Goldings hop.”

Our first beer after we’d moved from Wiltshire over to Essex and a truly local beer brewed just a few miles away from where we found it in a pub just over a mile from the campsite. Nice and light and a good session beer, it was ok but being a Golden it didn’t really hit my spot. 3.8% A.B.V.

While we were staying at: Woodpecker Meadow Campsite, Easthorpe, Essex.