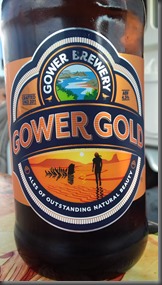 The brewery: “The idea of starting a microbrewery had been discussed many times. We were already running two busy pubs in the Gower, so forming a microbrewery was the natural next step.The company was formed in September 2011. We acquired a 5 barrel brew plant in October and renovated our building. Walls, floor, ceiling... the lot. The brew plant was installed in November, with haste to try and hit our goal of brewing on the 11th of the 11th of the 11th!  We managed it. Our 1st brew (Brew1)  was completed at around 4pm on 11/11/11. Not a date we'll forget in a hurry.“

The beer: “Gower Gold is a thirst quenching golden ale. It has refreshing citrus flavours and the lovely aroma of the cascade hops. Brewed since December 2011, this beer has become an all round firm favourite. Gower Gold clocks in at 4.5% abv and is available all year round…….Gower Gold is perfect on any occasion, but we think it's extra special with Fish or a Curry..

Perfect for a warm summer’s night on a campsite which was where it was drank, in the company of friends. 4.5% A.B.V. July 2018.