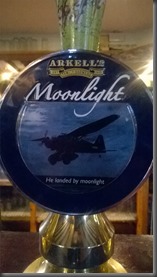 What they say: “Originally brewed as a special in 2003 to celebrate the 80th birthday of Peter Arkell OBE, father of the present Chairman James. The name moonlight portrays Peter's missions flying low-level sorties over France in 1943, picking up agents in occupied territory using the moon to land. The label on the bottle has a Lysander plane on it, which Peter Arkell actually flew in. Now a regular beer, Moonlight has a golden auburn colour with a warm toasty aroma and distinctive citrus hoppy flavour from Celeia hops.”

Another Arkell’s Ale and perhaps more enjoyable than the 3B and slightly stronger at 4.5& A.B.V. Again, a slight twang but it didn’t put me off at all.