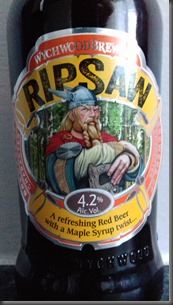 The brewery: “..tucked away behind the main street of the market town of Witney, in the heart of the Oxfordshire Cotswolds. Witney is historically famous for it’s three b’s; it’s bread, it’s blankets and it’s beer. Brewing has taken place in Witney for centuries.”

The beer: “Rich red beer using rye malt. The spicy hop aroma from Cascade and Topaz hops entice you in, while the distinctive caramelised flavours from the rye malt enhance the beer. “

Not on the Wychwood website so presumably a special  - probably for Aldi as that’s where I bought it. Not sure about the maple syrup twist but it was very refreshing for a red ale. 4.2% A.B.V. June 2018