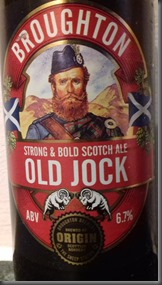 The Brewery: “Broughton Brewery was founded in 1979 by David Younger and James Collins in a former sheep station in the wee village of Broughton in the Scottish Borders. It was the first initiated Scottish microbrewery, which appealed to customers looking for a new “craft beer” experience outside the traditional mass-produced lager and exports. Scots, wanted something more, something dynamic, different, and with real flavour, hop character, and taste……

In 1995, Broughton underwent a change of ownership and was taken over by, Giles Litchfield of Derbyshire’s Whim Ales, who introduced the now famous “Beers with Character” slogan which was a family of 10 bottled ales. These beers AGAIN, showed Broughton’s effort to not only produce small hand crafted ale, but to stay innovative, defiant and forward thinking when it came to making good beer!”.

The Beer: “This dark red ale has a full-bodied flavour of malt on an excellent background of hop bitterness. The sweet malt offsets the fruity bitterness of the Perle and Bramling Cross. Savour this ale like a fine wine. Old Jock is a classic Scottish Ale and like all strong ales is best enjoyed at room temperature 10-12 deg C.”

I’m not sold on their idea of room temperature! But seriously this was a powerhouse of a beer. Definitely one to be sipped and savoured rather than sloshed back in readiness for another or you’ll be reaching for the paracetamol. 6.7% A.B.V.