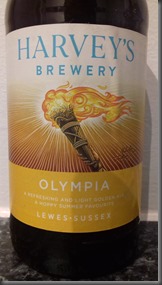 What they say: “Harvey’s Brewery Olympia Golden Ale is a very refreshing summer ale with a balanced complexity. It was first produced in 2005 to celebrate our major summer award at Kensington Olympia for Best Bitter. It became an instant hit and is especially appreciated when served at 11 degrees Celsius.”

Most definitely a summer beer this one and I would suggest perhaps serving even a little colder. Not my favourite style of ale but could be tempted on a hot summers’ night. When we get one. Available April to September. 4.0% A.B.V. October 2017.